Skip to content
New Orleans. The Big Easy. N’awlins. NOLA. Whatever you would like to call it, New Orleans is high on the bucket for just about every American I know. When I found out that the NCTM conference was going to be held in New Orleans this year, a co-worker friend and I immediately knew that we needed to attend, and go down south to experience all of what New Orleans has to offer.
On our first day in New Orleans, we went to the National World War II Museum, which was unbelievable. Throughout the four building exhibit, they had so much memorabilia from the Second World War, and it was exhilarating to say the least. After going through the World War II Museum, we had lunch at Cochon (which I would highly recommend!) and then headed back to the hotel to get ready for the conference. Afterwards, we took a quick trip down Bourbon Street, had some delectable Hand Grenades, and had a splendid dinner at The Court of Two Sisters.

On our second and third day, we had the conference for the greater part of the day, which was extremely informational and interesting. I was also able to meet two of my “math-educator” idols, Dan Meyer and JoBoaler. For dinner on Thursday, we went to Arnaud’s, a famous French restaurant located in the heart of the French Quarter. To top off a delicious dinner, they had a small jazz band come to our table and play “when the saints come marching home.” Talk about having a genuine New Orleans experience! 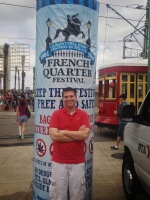 Saturday was the last day of the conference, and, after attending the Pelicans game the night before, we were all really excited to check out the French Quarter Festival. To say we ‘killed’ the festival would be an understatement. We ate fried alligator, crawfish bread, beignets, and pork chop lollipops, just to name a few. In between all of the amazing food, we listened to some great jazz music, including a samba band from Brazil! 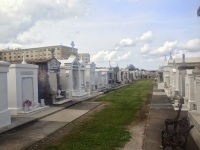 During our last full day, we got up early to have some world-famous beignets at Café Du Monde. Afterwards, we went to mass at the St.Louis Cathedral, which was beautiful. Interestingly, the cathedral has a flag for every country New Orleans has ever been apart of. We also had the opportunity to take a city tour, which included stops at City Park and a cemetery. Now, one may be wondering, why would you want to go see a cemetery when in New Orleans? You see, in New Orleans, everyone is “buried” in a mausoleum-esque above ground vault. It was really interesting to see how much different cemeteries are than the ones I am accustomed to up north. That evening, we had a chance to check out the world-famous “Commander’s Palace” Restaurant, which is where Emeril started his career. If you were looking to go to a place with authentic southern hospitality and food, I would definitely check this place out! Perhaps most notably, Commander’s subscribes to the ‘open kitchen’ philosophy, meaning that guests are allowed to freely roam throughout the kitchen at their own leisure.

At the end of the trip, it was clear that New Orleans lived up to the hype, and I already cannot wait to get back. Between all of the food, music, conferences and great people we met, it will most definitely be a trip I will never forget. As the French like to say, “Laissez les bons temps rouler.”

“Here travels the brave at sea.” As we close out this decade, I am blessed that I had the opportunity to spend the past two weeks in Norway to learn about my cultural heritage. Although both of my grandfathers were Norwegian, I never learned anything about Norway while growing up; as such, I was excited to learn about the indigenous Sami culture of northern Norway, the incredible valor exhibited by the Vikings, the history of the Hanseatic League, and the culture and customs of modern day Norway. While I appreciate my Norwegian heritage now more than ever, my favorite part was learning about how significant naval navigation was throughout the course of Norwegian history. On one rune stick that was carved over one thousand years ago during the Medieval Ages (see the fourth picture above), a runic inscription proudly boasts that “here travels the brave at sea.” Norwegians have always led the world in exploring the unknown: the Vikings created trade routes connecting three continents, there is considerable evidence that the Hanseatic League traveled to North America and traded with Native Americans centuries before Columbus, Roald Amundsen was the first person to explore both the North and South Pole, and Thor Heyerdahl demonstrated the possibility of Incan contact with Polynesian Islands by floating on a raft made of balsa-wood for over 100 days. This past decade, I have been so privileged to continue this legacy and graciously had the opportunity to visit over 30 different countries, each with their own unique history and culture. In my travels, I have grown to tremendously appreciate the wealth to be found in diverse cultures. In doing so, I have learned so much about our country, our world, and perhaps most importantly, myself. Perhaps Andre Gide said it best: “Man cannot discover new oceans until he has the courage to lose sight of the shore.” Godt nytt år! Here’s to another decade of exploring the world. 🇳🇴
Referring to the majestic fjords of Norway, perhaps Rick Riordan put it best: “Pretty doesn’t do it justice. I felt like we'd sailed into a world meant for much larger beings, a place where gods and monsters roamed freely.” (The Ship of the Dead, Magnus Chase and the Gods of Asgard, #3) @visitnorway
God jul fra Norge! 🇳🇴 (Merry Christmas from Norway!)
My favorite Norwegian saying thus far: “Det er ikke noe som dårlig vær, bare dårlig klær,” which means, “there is no such thing as bad weather, just bad clothing.” It was an interesting experience to explore the arctic circle in 24 hours of darkness, too!
Muchas gracias Perú por un viaje maravilloso. ¡Hasta la próxima vez!
Perhaps Anthony Bourdain put it best: "It’s an irritating reality that many places and events defy description. Angkor Wat and Machu Picchu, for instance, seem to demand silence... for a while after, you fumble for words, trying vainly to assemble a private narrative, an explanation, a comfortable way to frame where you’ve been and what happened. In the end, you’re just happy you were there and lived to see it.”