For the past six years, I have had the privilege of teaching at East Side High School in Newark, NJ. Founded in the early 1900s in the Ironbound, the school first served the many German, Polish, and Italian immigrant families that made the neighborhood their new home. This tradition continued as subsequent waves of new peoples settled in Newark and worked to realize the American Dream. East Side was built over a three-year period and opened in 1911. Interestingly enough, the resolution from 1908 “originally planned to erect a community high school of the traditional type, but it opened, finally, as the East Side Commercial and Manual Training High School—the first in the city of its kind.”

In a similar way, Columbia University’s Teachers College was built in the late 19th century. Started by Grace Dodge in Greenwich Village as a “kitchen garden” school, it aimed to “teach cooking, sewing, hygiene, and other practical arts to poor, immigrant women. By 1887, with the help of philosopher Nicholas Murray Butler and a site donated by the industrialist George Vanderbilt, Dodge’s kitchen garden school had evolved into something much greater: an entirely new kind of institution devoted to teacher education.”

Teachers College was the first graduate school of education in the country, and was created to prepare its students to teach the overwhelming number of immigrant children who were flocking to New York City. My beloved grandfather was one of these kids; his mom had come to America at the turn of the century. When Teachers College opened, the front entrance (formerly known as the Household Arts Building) had six mosaic panels installed on the theme of “home industries and home work of the Colonial housewife: sewing, spinning, churning, candle dipping, weaving, and cooking on an open fire.” Although well-intentioned, teachers at the time had profoundly low expectations for immigrant students; they wrongly believed that their only way forward was through a glorified form of home economics.

Teachers College has come a long way since its foundation. Outgoing President Susan Fuhrman recently stated that people like “John Dewey had ideas about how young people learn—and conceived the modern American classroom. Maxine Greene had the idea that the arts could help students make meaning of their world. She turned aesthetic awareness into a central tenet of modern education and the pursuit of social justice. Lawrence Cremin and Edmund Gordon helped us think about the community’s contribution to education. Learning occurs everywhere, and community context deeply affects the learning that happens in schools.” Today, TC leads by example, as it is setting the standard for next-generation EdTech. Professors like Christopher Emdin are nationally-recognized leaders in the field of culturally responsible pedagogy. Simply put, TC has raised the bar: ensuring that all students have access to a transformational education.

While I am proud of the steps that Teachers College has taken to increase the expectations that we have for our most vulnerable students, the same cannot be said, unfortunately, for many of our U.S. public schools. At the 91st annual convention of the NAACP, President George W. Bush had some strong words for those who fail to believe in our amazing students. Bush said that, “Discrimination is still a reality, even when it takes different forms. Instead of Jim Crow, there’s racial redlining and profiling. Instead of separate but equal, there is separate and forgotten. And I will confront another form of bias: the soft bigotry of low expectations… we have come so far in opening the doors of our schools. But today we have a challenge of our own. While all can enter our schools, many-too many, are not learning there. There’s a tremendous gap of achievement between rich and poor, white and minority. This, too, leaves a divided society. And whatever the causes, the effect is discrimination… Equality in our country will remain a distant dream until every child, of every background, learns so that he or she may strive and rise in this world. No child in America should be segregated by low expectations, imprisoned by illiteracy, abandoned to frustration and the darkness of self-doubt.”

Profound words from our 43rd President, but what does the research say? One of the most famous pieces of educational research is psychologist Robert Rosenthal’s Pygmalion in the Classroom Study. Its results demonstrated that teachers with high expectations for students consistently had students perform significantly better over time. In fact, Rosenthal suggested that “the results of the experiment further evidence that one person’s expectations of another’s behavior may come to serve as a self-fulfilling prophecy. When teachers expected that certain children would show greater intellectual development, those children did show greater intellectual development.” These findings are also consistent with the more recent work of Carol Dweck. Her research on growth mindset suggests that those with a growth mindset significantly outperform those with a fixed mindset over time. Other studies have found that teachers that have a high locus of control for student learning outcomes are more effective than teachers that tend to externalize their students’ performance.

In 1911, the Newark Board of Education opened East Side Commercial and Manual Training High School with the aim of preparing immigrant students for work in the factories and service professions found in abundance in the Ironbound.  During the intervening years, institutions such as Teachers College have challenged society’s ideas about what students from places like Newark can accomplish. Unfortunately, schools like East Side still find themselves struggling with setting high expectations for ALL students. 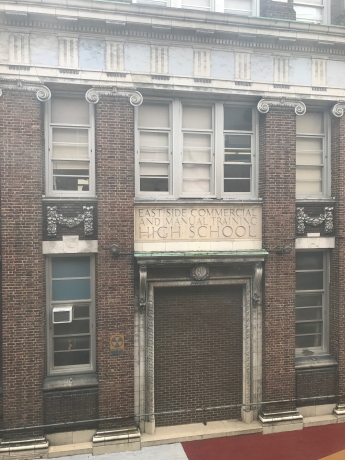 I have heard, more often than I would care to admit, comments from some school faculty that unfairly question the potential of many of our exceptional students. I have also witnessed first-hand what those low expectations look like in front of a classroom full of young adults hungry to learn. Making ignorant comments about students, starting class twenty minutes after the bell has rung, and using outdated teaching methods do little to motivate students and challenge them to live up to their potential. I have even heard teachers talking about how little potential some of our students have, especially compared to their own children. Perhaps the fact that East Side’s original name still graces the entrance of our building is a testament to the soft bigotry of low expectations that permeates our school’s culture today.

That being said, I am constantly inspired by many of my colleagues, some of whom graduated from East Side and have returned to teach at their alma mater so as to ensure that all students have access to a high-quality education. While many similarly talented educators are at work in schools across the country challenging students to achieve new heights, too many other teachers working in urban and rural areas continue to doubt the ability of their students. The students of today are the leaders of tomorrow, and we must re-think this paradigm if we are serious about moving our country forward.

If there is anything that I have learned over the course of the last six years, it is how much potential and resilience our students truly have. Last week, I had the privilege of taking a bunch of students to Columbia University’s Medical School at New York Presbyterian Hospital. That day, a plethora of doctors reinforced the virtues of sacrifice, perseverance, and giving back to the greater community. Their stories were profoundly inspirational. One doctor in particular shared his story of attending a high school with low expectations, and the major challenges he faced during his first year of university adjusting to college-level work. For me, his story further emphasized how important our work as educators really is, and how chronically-low expectations can severely affect a student’s educational trajectory. Working with teenagers can be innately stressful, but these stories reminded me that we must reject the soft bigotry of low expectations. They reminded me of the importance of having high expectations – for every single student.