Cambodia was one of my favorite countries that I have ever been privileged to visit. I started my trip last month in Siem Reap, a small city in the middle of the country that has hundreds of well-preserved temples that are thousands of years old. Thousands of years ago, the city was called Angkor, a megacity that contained 0.1% of the world’s population at its heyday. Angkor served as the capital of the mighty Khmer Empire, an empire that was a powerful state in South East Asia. The kingdom was so large, in fact, that between the 9thand 15th centuries, the Khmer Empire covered much of what today is Cambodia, Thailand, Vietnam, and Laos.

Exploring Angkor Wat, Bayon, and other structures around Temple Town was truly an indescribable experience. After all, “Angkor evokes the image of a giant palimpsest – like a medieval parchment erased and overwritten repeatedly. The capitals of the Khmer Empire were established here one after another, one on top of the other, almost continuously for over seven centuries, profoundly shaping the entire landscape. Over time, a dense and complex matrix was created, evidenced primarily by the spectacular succession of monumental temples. These grandiose structures made of brick and sandstone have survived the passage of time, unlike the greater part of the cities whose houses and palaces, built of wood and other perishable materials, have disappeared into the jungle leaving behind the skeletal remains of the Angkor civilizations seen today. Nonetheless, the remaining skeleton is so impressive that naturally everyone tries to imagine the temples at the time of their splendor, bustling with life and color” (Angkor Guide Book). 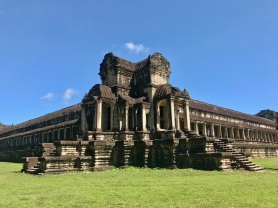 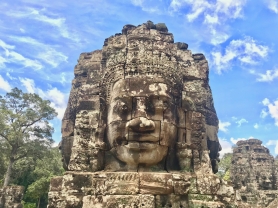 Angkor slowly started losing its influence during the 15th century. Although many historians still wonder what exactly brought down the mighty Khmer Empire, we know now that the neighboring Siamese kingdom in Ayutthaya (modern-day Thailand) conquered the kingdom during the mid-1400’s. The Kingdom of Angkor slowly drifted into irrelevance, until the French colonized “Indochina” in the mid-19th century. Cambodia was placed under French rule for almost a hundred years, until Prince Norodom Sihanouk (who claimed Angkor King lineage) won independence for his country. The United States, upset over his rise to power, helped Lon Nol set up a successive military coup, which led to a brutal capitalist form of government. Many Cambodians hated the US-backed Nol and supported an up-and-coming rebel group that called themselves the Communist Party of Kampuchea (CPK), otherwise known as the Khmer Rouge. 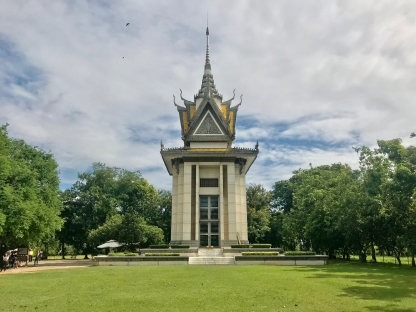 Under the brutal leadership of “Brother Number One” Pol Pot, the Khmer Rouge took control of Cambodia on April 17th, 1975, immediately renamed the country Democratic Kampuchea, and started a brutal genocide that tortured and killed anyone with alleged ties to the former government. By 1980, the crimes of the Khmer Rouge were well-known: Pol Pot ordered the execution of two million of his own people (about one-quarter of the population), including 80% of teachers and 95% of doctors. Cambodia, as Pol Pot liked to say, was returned to “year zero.” 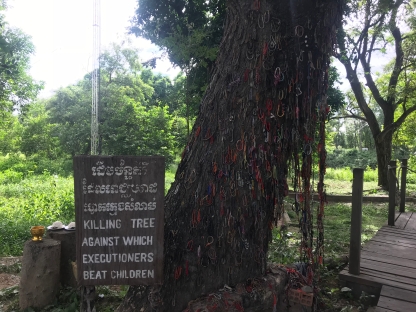 During my time in Cambodia, I humbly visited one of the mass killing fields and “Security Prison 21″ (S-21), also known as Tuol Sleng, “a former high school in central Phnom Penh that the Khmer Rouge had turned into a torture and death house. Vietnamese journalist and soldiers first walked in to find rotting corpses still in shackles. Gruesome torture implements lay about, and in an outbuilding the soldiers found thousands of pages of records, including photographs of the victims. At least 15,000 Cambodians had been taken there, tortured until they confessed to being an enemy agent, and then killed – whacked on the head with an iron pole” (Cambodia’s Curse).

The high school turned into a prison

An empty classroom used for torture 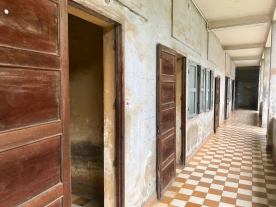 A hallway in the high school

Unfortunately, Pol Pot was successful in returning Cambodia to year zero, and the country has never fully recovered from its dark past: By the tenth grade, 87% of students have dropped out of school. In fact, most Cambodians today over the age of 35 have had little formal education; the average family makes about $3.00 USD a day, and Cambodia remains one of the poorest countries in the world. Visiting this high school turned death camp turned genocide museum is an important reminder to all of us as to what can happen when we allow a narcissistic autocrat to separate families, make false promises, scapegoat immigrants and political opponents, lie to their citizens, and make a free press the “enemy of the people” (as a side note, we are often mortified when we look at the horrors of the past, but too many of us remain silent about the injustices being carried out in the United States of America right now). 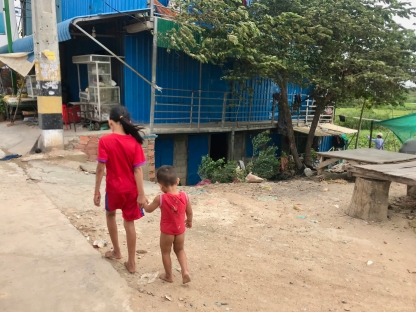 Yet in the midst of this deep oppression, I somehow found myself at the most special place I have ever visited in my entire life: The LaValla School. Amongst all the devastating poverty and oppression that has long crippled the Cambodian people, lies one of God’s greatest treasures, where you can hear the laughter and feel the joy of the children from beyond the gates. The LaValla School is (somehow) the only government-approved school in the entire country of Cambodia that provides a full primary education to children with physical disabilities. Founded by the Marist Brothers over twenty years ago, the amount of genuine joy and happiness at this place is truly remarkable.

The second I arrived at LaValla, students came running up to me and gave me a big welcome hug. One of the students took my hand and started showing me around the school right away; I have never felt so welcomed during any school visit in my life. To be fair, this place is more than just a school – it is a true community.

The Kingdom of Cambodia truly stole my heart this week. After decades of genocide, corruption, oppression, and extreme poverty, the Cambodians that I met were some of the most resilient and welcoming people that I have ever known. That being said, all of us are “guilty of romanticizing squalor and imagining that a simpler life must be happier and more content than our own. It is simply not true when the measure of that simplicity is no access to medicine, education or clean food and water . . . [yet] there is no denying the subtle charms of lives lived with a careful attention to the present and the everyday” (Walter Mason).

On the day of my flight back to Kaohsiung, I never cried so hard leaving a place in my entire life. Perhaps Mike Duffy, who visited the Lavalla School for two months last year, put it best: “I have obviously struggled to put into words the soulful beauty of life here, where God is ever so vibrantly present. It is something that I will do my very best to continue to share with you all, as this experience has already changed the man I am. With a filled heart and tremendous pleasure, I am adding some pictures to try to encapture LaValla, the children, and their joy to be alive.”

Thank you for a truly transformational week, Kampuchea! This school, these amazing children, and this beautiful country will be in my heart forever.

One thought on “Exploring Cambodia, the Kingdom of Wonder”